Why wear a Poppy? 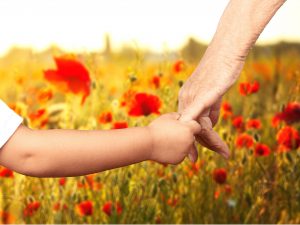 It’s over a century since more than nine million soldiers were killed during the First World War. The last of the veterans from that era are dead and many young people know little about the causes and devastating aftermath of the conflict. Many refuse to wear a poppy because they think it glorifies war. Perhaps it’s more important than ever that we discuss the poppy’s place in history.

Much of the worst fighting in World War 1 took place in Flanders, the western part of Belgium. The area suffered terribly, with homes, farms, roads and trees all completely destroyed. The land became a bleak, muddy graveyard for the thousands of soldiers who fell there.

One plant, however, thrived in the disturbed soil and that was the poppy. Year after year, as the warm weather arrived, the poppies bloomed and turned the grim bare ground into a sea of red. At that time, fighting in Flanders was a young Lieutenant, Colonel John McCrae, a Canadian physician. In May 1915, his close friend and fellow soldier was killed in action. Seeing the poppies growing alongside his grave moved McCrae to write the poem ‘In Flanders Fields’, which was later published in Punch magazine.

The idea to use the poppy as a symbol of remembrance for dead soldiers came from an American professor and YWCA worker, Moina Michael, in 1918. She wrote a poem in reply to McCrae’s called ‘We Shall Keep the Faith’ and started to sell silk poppies. The idea was adopted by the American Legion in 1920 and she became known as ‘The Poppy Lady’.

The first poppy appeal was held on Armistice Day 1921. It was hugely popular and, despite a recommended selling price of threepence per poppy, single petals sold for £5. In all, the appeal raised £106,000 – that’s nearly £30 million in today’s terms!

In recent years some people have chosen to wear a white poppy, either instead of or alongside a traditional red one. White poppies symbolise pacifism and also remember the civilians killed in conflicts past and present, as well as the soldiers. The idea is not a modern one as I originally assumed; it was initially put forward in 1926 by the No More War Movement, and the first white poppies were sold by the Cooperative Women’s Guild in 1933. They are now distributed by the Peace Pledge Union, a British pacifist non-governmental organisation that works for a world without war.

However you choose to wear your poppy this year I hope you now have a greater understanding of the interesting and complex story behind this iconic flower.