Water Works – Why we should all drink more water 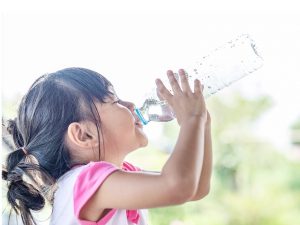 Ask most people how much fluid they are supposed to drink in a day, and they will reply “Eight glasses of water.” This number has seeped into the public consciousness over the past couple of decades so it might surprise you to know that it has very little basis in science!

However, it is important to stay properly hydrated. Fewer people know that if you feel thirsty you are already dehydrated, and this has a real impact on how your body and brain function.

Dehydration leads to a decrease in our physical performance. Losing just 2% of your body’s water contact can cause fatigue, problems with temperature control, and make exercise feel more difficult, physically and mentally, and it’s not uncommon for people to lose 6-10% of their body’s total water content through sweat during a workout, and as muscle is 80% water this increases muscle stress.

Our brains are also strongly influenced by hydration. Studies have shown that even mild dehydration impacts brain function. In separate studies of men and women it was found that about 1.5% fluid loss impaired mood and concentration, decreased working memory, and increased feeling of anxiety, fatigue and the frequency of headaches. 1.5% fluid loss can easily occur during normal daily activities, never mind during exercise or hot weather. Worryingly the effects of dehydration are shown to be worse in children and the elderly.

There has been some scientific interest in the effect of increasing hydration on migraine sufferers. So far, some studies have shown that while keeping hydrated doesn’t stop migraines completely, sufferers in the studies reported that the frequency and intensity of the migraines decreased when they were properly hydrated.

Constipation is a common health problem and can be serious in children and the elderly. Low water consumption does appear to be a risk factor in these cases. Some studies have shown that carbonated water seems to help the situation more than still water though scientists haven’t yet explained why.

Alcohol acts as a diuretic, so it makes you lose more water than you take in. The dehydration effects of alcohol are responsible for the thirst, fatigue, and headache which inevitably accompany a hangover. It’s a good idea to alternated alcoholic drinks with water and to drink a large glass of water before going to sleep, after a night out on the town.

Finally, water both increases satiety and boost metabolism so is great if you’re trying to lose weight. Studies show that dieters who drank half a litre of water before each meal lost 44% more weight over a period of 12 weeks.

Try it. Make a real attempt to stay properly hydrated for a week and monitor the results. You may be surprised.