The History of Christmas Baubles 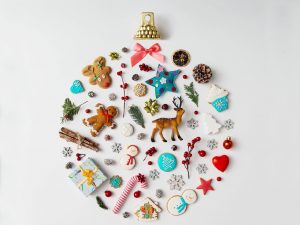 Every year we go with the children to choose a new Christmas tree decoration. We don’t do themed trees in our house so our annual tree is a history of the kids’ eclectic and often eccentric tastes down the years. Traditional inherited hand blown glass ornaments nestle alongside a plastic gingerbread man, a gaudy fairy in striped tights, a robot, a festive dachshund, and a host of other unlikely characters. Every year is a delight of discovery as my teens and preteens unpack, reminisce and tease each other over their past choices.

But where did the idea of decorations originate and how did they evolve into what they’ve now become?

Tinsel originated in Germany in the early 1600s. Back then it was made from real shredded silver. Tinsel makers hammered the silver until it was thin, then cut it into strips. It was so popular that tinsel machines were invented to keep up with demand. Clearly silver was a little expensive and eventually the plastic variety took over.

We have the Germans to thank for baubles. They were invented in the 1840s by Hans Greiner. His original glass fruit and nuts developed into beautiful ornate ornaments which so charmed Queen Victoria that she brought them back to Britain.

As they were all hand-crafted the first, baubles were very expensive. Improvements in plastic manufacturing meant that cheaper versions became available, and baubles became available to the masses.

The green fir tree was originally used by Pagans and Christians to celebrate winter. Pagans used branches of the fir tree to decorate their homes during the winter solstice, as a reminder that spring would come again. The Christians adopted them later.

The tradition of Christmas trees seems to have originated about 1000 years ago in Northern Europe. They were often hung upside down from the rafters. In modern times improved manufacturing techniques have allowed for the production of artificial trees which can be very difficult to tell from the real thing!

In Victorian times, Christmas trees were been decorated with candles. In 1895, an American man, Ralph Morris, was so concerned about the fire hazard of candles and Christmas trees that he invented the first electric Christmas lights, which are similar to those still in use today.

Over the years there have been glass and plastic variations of reindeers, stars, fruit, butterflies, birds and even festive dachshunds (see above!) but the debate still rages about whether there should be an angel or a star on top of the tree.