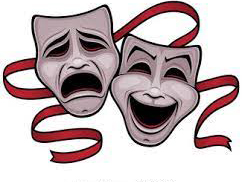 Time of my Life By Alan Ayckbourn
20th, 21st, 22nd & 23rd October 2021
When Gerry Stratton plans a family meal out with his two grown up sons to celebrate his wife, Laura’s 54th birthday and proposes an almost prophetic toast to ‘happy times’, he has no idea of the events that will unfold over the course of that evening. Family skeletons intrude on cheerful domesticity.

Don’t You Want Me? A comedy by local playwright & Hall Player member, Andy Bennison
26th, 27th, 28th & 29th January 2022
A comedy by local playwright and Hall Player member, Andy Bennison
In the 1980s, the Craven Street Community Centre Discos were legendary. With the building due for demolition there is one last chance for old friends to meet again after nearly forty years. It’s a night for dancing, drinking, reminiscing and the re-opening of old wounds. It’s the end of an era, but for some, a beginning.

Blackadder Goes Forth By Richard Curtis, Ben Elton & John Lloyd
27th, 28th, 29th & 30th April 2022
It is 1917, and lunatic General Sir Anthony Cecil Hogmanay Melchett is leading the British troops at the front lines against the Germans, while everyone waits for Field Marshall Haig’s big push. For Captain Edmund Blackadder, however, it’s something he’s too cowardly to face and he will try various crazy attempts to escape, all of which will take a turn he never expected. Sharing a dugout with George and Baldrick, his main obstacle for escape s Captain Kevin Darling who will ensure everyone is present for the big push as it appears he will be safe and sound with the general.