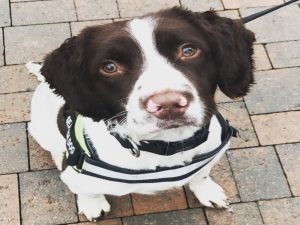 Shankly will be out ‘on duty’ with his specialist-handler and police colleagues throughout the city centre from September until December.

Shankly, a new recruit and specially trained narcotics dog, will conduct a walking tour of the city centre on selected days.
Detection dog teams are used in a variety of operational scenarios to actively seek and indicate the presence of the scent they are trained for, reassuring the pubic that they are in a safe space.

Due to dogs like Shankly’s ability to effectively detect minimum traces of contraband the request for specialist dog units is rapidly emerging across the country and is considered good practice.

Andy Coverdale, Chair of BID’s Citysafe Group said: “According to statistics from our annual general public survey 85% of people visiting the city centre ‘feel safe’- we want to ensure that remains the case.
“Under the BID’s Citysafe brand we have invested heavily in a digital upgrade of the city’s CCTV system and are undertaking a project with partners, to reduce anti-social begging.
He added: “Shankly will be a welcome addition to the team, as part of our campaign to ensure that people who visit, live and work in the city centre feel comfortable and safe”.

Shankly, a lovable spaniel who’s not surprisingly from Preston, is a big supporter of his beloved PNE. In his spare time, he likes nothing more than training with his handler from H & A Protection Services, to ensure he’s at the top of his game.