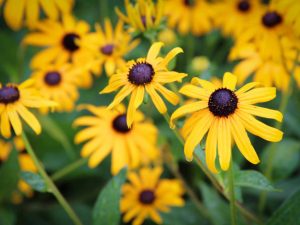 You might not know its name, but you are probably familiar with the Rudbeckia. A late summer perennial daisy. It’s sometimes called Coneflower or Black-eyed Susan.

It flowers from early August to late September and I find it a valuable addition to the late summer garden. It does particularly well in full sun in rich, well-drained soil. You can sow them as annuals indoors in spring to set out after frost or plant as perennials in spring or autumn. Divide every 3 to 4 years and deadhead to avoid self-seeding, though personally I see self-seeding as a bonus trait in a plant! Mildew can be an issue on the foliage but can be avoided if you don’t overcrowd the plants. Watch the young foliage because slugs and snails find it tasty. Once the plants are established this isn’t a problem.

Rudbeckia ‘Golden compass’ produces masses of classic bright yellow and black Rudbeckia flowers on a bushy plant. It grows up to 70cm in height and can be grown from seed as a half-hardy annual or a short-lived hardy perennial.

Rudbeckia fulgida is the classic ‘Black-eyed Susan’, with sunflower-yellow flowers and a very black central cone. It does better in damper ground than many of the varieties so choose this one if your garden is less well-drained.

I love Rudbeckia ‘Prairie glow’. It is a stunning plant and good for adding height as it grows to 1.5m. Its huge 6cm diameter flowers have warm orange petals with yellow tips.

Rudbeckia ‘Irish eyes’ is a more unusual variety with a yellowish rather than brown cone, as well as yellow florets. It repeat flowers from July through to October.

If your soil is on the dry side, try Rudbeckia fulgida ‘Deamii’. It produces shining, golden flowers with jet-black cones from early September to late October and into November. It has slightly smaller flowers, but they are lovely, and abundant.

Rudbeckias naturally grow in dry savannahs, grassland prairies and in the glades of rocky upland forests across North America but they have become a much-loved bushy stalwart of the herbaceous border and will delight from late summer right through the autumn.