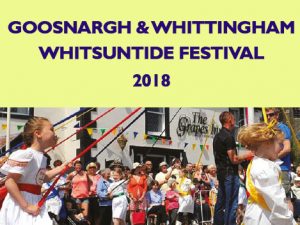 Goosnargh Village played host to a Festival Day with a difference on Saturday, 2nd June.

The theme “Peace and Harmony” was chosen to commemorate the centenary of the ending of WW1 and 19 year old Jennifer Birkett led a group of “Peace Children” carrying a symbolic dove cage ready for a presentation and release of doves from the crowning platform.

Friends and families turned out in force to form a spectacular procession through the village. Fancy Dress was judged in advance by Pauline Wheatley and Elaine Pickup with the overall best fancy dress trophy being awarded to Ollie’s Trust Nursery and Pre-School and the most original fancy dress trophy going to Matthew Waring.

The judging of 9 amazing decorated floats was no easy task for Richard Lodge and Elaine Richardson.

The Barton Grange Trophy for overall best float went to “The Pirates of Whitty Duck Pond” by the Holden / Watkinson Families & Friends and the Jill Thiele Best in its class trophy to Goosnargh Ducklings Galleon. All entries were awarded prizes for subjects as diverse as “Paddington” and the WI’s “Bottle Ship” highlighting the issues around plastic pollution.

Paul Rigby’s BWD Big Band and the Eclipse Parade Band played the crowds in to the assembly point and we welcomed Aerial Artists “Kelly Amelia Circus” featuring Goosnargh’s own Hannah & Grace Chadwick, and also John Gornall on his Penny Farthing as special attractions.

Sheila Birkby’s delightful Maypole dancing display and a slick and stylish performance to “Blues Brothers” themes by Carol May’s Academy Dancers completed the opening of the Festival and the Manchester Phoenix Pipe Band struck up to herald the Procession through the village to The Square, Whittingham.

Special guests the Mayor & Mayoress of the City of Preston, the Chairmen of Goosnargh and of Whittingham Parish Councils, Clergy and Rotary Representatives and visiting Queens from surrounding villages settled along with a full house of spectators for the Commemoration Presentation.

MC Nik Birkby handed over to Sue Brown of “Doves for Life” for a brief explanation of the significance of the Carrier Pigeon  (the most decorated animal involved in WW1) a tribute to all the fallen in that conflict.

Retiring Queen Niamh read a short poem, then Festival Queen elect Romilly released a single dove by hand  followed by a 20 bird release from beautifully decorated baskets to a round of applause from all present. Niamh then went on to crown Romilly Louise Taylor our Festival Queen 2018. In her first speech as Queen Romilly spoke of her wish to use her year in office to raise awareness of Alzheimer’s Disease. The colour forget me not blue had been chosen for its significance both in association with WW1 and as the flower symbol of the Alzheimer’s Charity and featured in ribbon decorations, sash & attendants’ dresses. Special also was Romilly’s Tiara, worn by her mum on her wedding day. 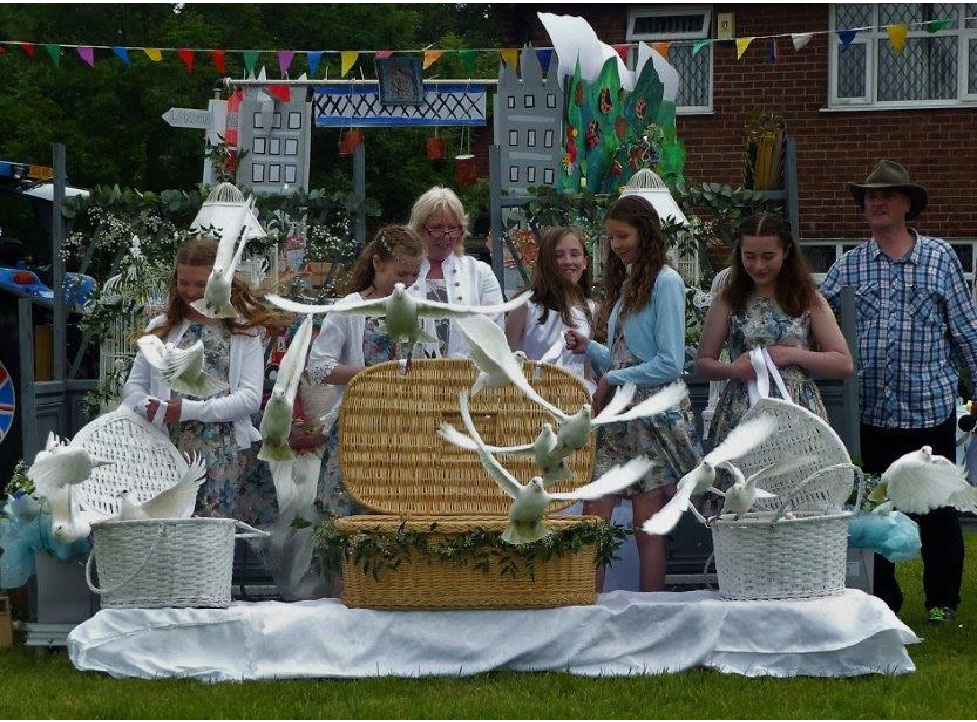 Following the crowning & dancing the procession returned to Goosnargh Village Hall fronted by the Scouts with their banners and The Longridge Band for the now legendary Celebration Tea in the Village Hall. Romilly received the Tom Kirby Rose Bowl to hold for the year and began her duties the following day at Bushell House Founder’s Day where she read in Church supported by 8 of her Retinue and received a gift from the Trustees.

The Committee would like to thank the residents of The Square and the army of volunteers who helped, as always, to ensure the success of the day with special mentions to PC Chris Banks, with us for his 14th and last Festival Day, who was presented with an inscribed pen with our heartfelt thanks and to Master Baker Paul Cross for his massive contribution to the Tea.