PRESTFEST RETURNS TO THE CITY ON SATURDAY 22ND JUNE 2019 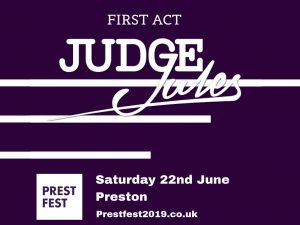 The annual event, celebrating the city’s award-winning nightlife, returns to the Flag Market under the shadow of the iconic Harris Museum on Saturday 22nd June.

Legendary DJ Judge Jules is the first act to be announced with a further two names still to be revealed. Judge Jules is an iconic figure in British dance music whose career has spanned three decades as a DJ, record producer, promoter and radio presenter. Jules held a residency on BBC Radio 1 for seven years, ran his own club night ‘Judgement’ in Ibiza for 15 years, and has previously been named ‘Best DJ in the world’ by DJ Mag.

Continually touring, he also hosts an internationally syndicated radio show called “The Global Warm Up” which can be heard across mainland Europe, the US and the Middle East.

Jules regularly plays at top club nights in the UK including Cream and Gatecrasher and has packed out fields at some of the UK’s best festivals and weekenders over the years including Creamfields and Global Gathering.

Organisers have confirmed that a further two huge performers are to be announced soon and are encouraging people to get their tickets at the lower rate beforehand.

Mark Whittle from Preston At Night said: “Prestfest is established in the city’s calendar now and we promise the 2019 event will be the best to date. “We are really pleased to announce Jules as our first act and promise attendees that the two artists that we will be announcing shortly are big names – ticket prices will increase when the full line-up is announced, so we’re encouraging people who want to be at Prestfest to get their tickets now”.
Judge Jules said: “Prestfest is a great event and I am really looking forward to playing a huge set, hopefully in the sunshine”.

Prestfest is a Preston At Night event from Preston BID