So we’re well into 2018 and the Chipping Steam Fair Team are busy preparing for this years show, which will be our 20th event. We are pulling out all the stops this May to make CSF2018 extra special, to mark this amazing mile stone and say a huge thank you to our supporters, visitors and exhibitors. We’ve hundreds of exhibitors eagerly anticipating the opportunity to show off their pride and joy including steam traction engines, vintage tractors, classic cars and motorcycles, pedal cycles, classic plant, commercial and military vehicles. Not to mention our regular attractions including live musical entertainment in the beer tent (until late Sat & Sun), the funfair, craft fair, food hall, arena entertainment, puppet shows, donkey rides, demonstrations and the ever popular digger playpen. Our special performers this year are The Batala Band (Samba Reggae) on Saturday, Duck Herding on Sunday and we’re going out with a bang on Monday with a Military Gun Display.

In 1997 the old Chipping Village Hall was in desperate need of replacement and the village had started fundraising for a new build. A family fun day was organised with lots of different events taking place all around the village including street stalls and a car boot sale. Mary Harrison, our founder, came up with the idea of gathering together a few classic vehicles owned by some of the locals and congregating on the Talbot Public House car park. That first year there were only a handful of them such as a sports car, two vintage tractors, a stationary engine, one commercial vehicle and half a dozen old motorbikes. There were a few small stalls to accompany the vehicles such as a toy stall and a blacksmith with his anvil who offered to marry couples in exchange for a donation towards the village hall fund.

The collection proved to be quite a hit with visitors approaching Mary throughout the day asking if she would repeat the event the following year so that they could exhibit their treasured classics. Over the next 12 months Mary was inundated with potential exhibitors and it became clear that they were going to need a larger location. In 1998 they held the fair on the agricultural show site and
the turn out was phenomenal. That second year they raised an incredible £10,000 which all went towards the Chipping Village Hall project. This was match funded by the National Lottery and Chipping / District Memorial Hall was opened on the 14th November 1999 by Mr Jack Berry MBE. Since then Chipping Steam Fair has become an annual event, with the exception of a cancellation due to the foot and mouth epidemic in 2001 and severe flooding in 2003. Every year all proceeds go to local charities and good causes across the region. In 2004 they relocated to the current site on Green Lane which year on year attracts every more enthusiasts. From July until May a large team of unpaid volunteers work hard to prepare for another successful show.

The show runs 26th-28th May from 10am until midnight over the weekend and 10am until 5pm on bank holiday Monday. Admission is £9 for adults, £8 for OAP’s and children over 12 year old, under 12’s are free! 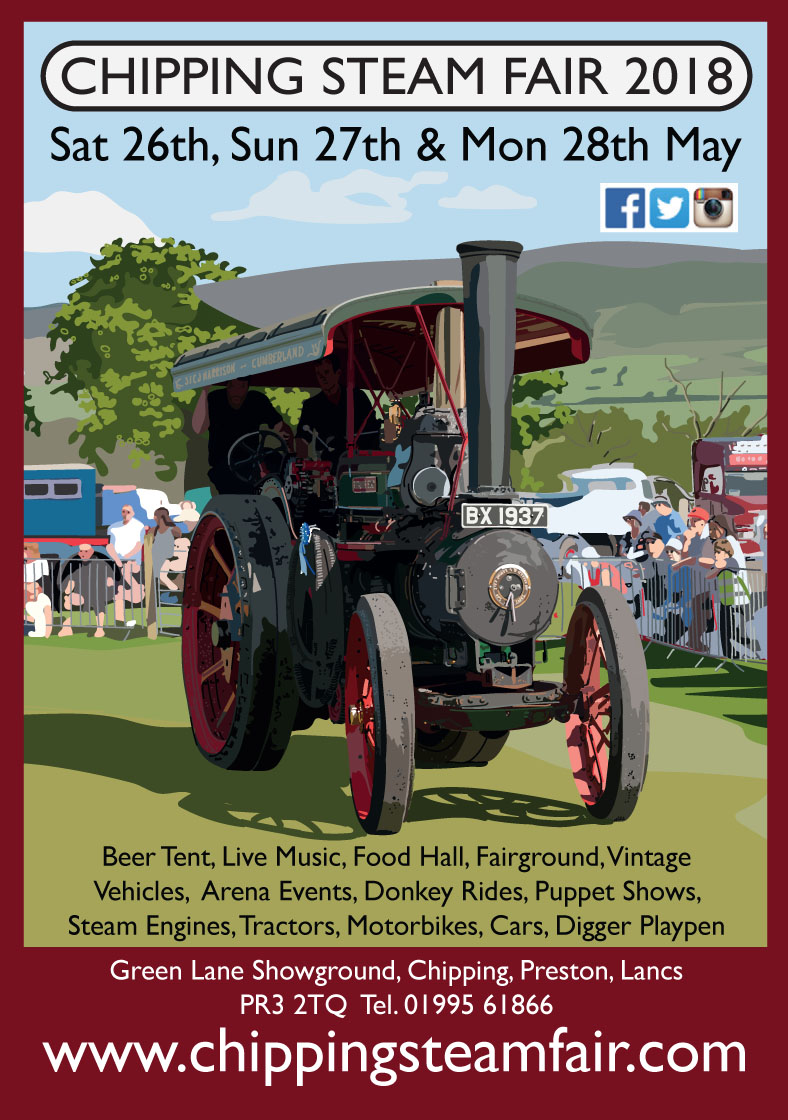