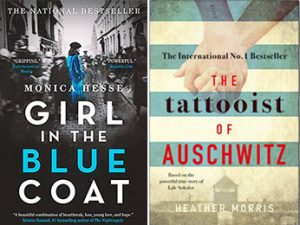 The Tattooist of Auschwitz by Heather Morris

There are many books about the horrors of the Holocaust, some fictional, others biographical. This 2018 book is one of the later. Heather Morris had a chance encounter with Holocaust survivor Lale Sokolov in 2003, and over the following three years until his death, he told her the story of his life.

Lale was a Slovakian Jew and in 1942, at the age of 25, he was transported to Auschwitz in Poland. Well presented and a bit of a chancer, he managed to get appointed to a job that would allow him to remain alive for the remainder of the war, and give him privileged accommodation and food. He became the Tatowierer whose job it was to scratch indelible numbers into the skin of prisoners.

At first glance this might appear to be a depressing story, but it is ultimately not a story of death but a story of love, survival, and determination in the most horrific place on earth. Here the inmates try to maintain some level of existence despite the fear of death every day. Lale meets Gita, a young Jewish woman assigned to work in the camps and they plan for the seemingly unthinkable: a life beyond the camps. What Morris gives us is a story that you won’t be able to put down. A story of hope that will uplift you and reveal the very best of humanity.

The Girl in the Blue Coat by Monica Hesse

Adult fiction is not the only genre to venture into Holocaust literature, and age appropriate novels are available for children and young people. One such novel is The Girl in the Blue Coat, aimed at the young adult market. This remarkable novel is fictional, but rooted in an impeccably researched Amsterdam under Nazi occupation.

Hanneke is 19 years old and works for an undertaker. However, she also works on the black market, obtaining items otherwise rationed or banned under Nazi occupation. She hates the new regime and the sight of soldiers in her city, but gives very little thought to the treatment of the thousands of Jews living in the Netherlands. That is until one of her clients presents her with a rather unusual request. She wants her to find Mirjam – a 15 year old Jewish girl whose family have been killed and who was in hiding until she vanished. This request takes Hanneke into a world of resistance that she never knew existed, and the true horror of the treatment of Jews becomes apparent.

Hesse brings 1940s Amsterdam vividly to life and incorporates real stories of individual heroism (such as the resistance workers who saved up to 600 babies by smuggling them out of Amsterdam) among the fictional characters she has created. Inspired by a trip to Holocaust-related sites in and around Amsterdam she draws on the real life accounts of resistance writers during the war and Jews in hiding, to present a story of how simple acts and unwitting betrayal can change lives.