The success of the Mini range is partly due to its expansion into a wider market. Mini are now aiming their all-new
Clubman estate straight into the premium market. As a direct competitor for the ever-popular Volkswagen Golf
and Audi A3, Mini are hoping to gain far more success than the old model with both private and fleet buyers in a
very competitive marketplace.

I’ve been testing the Mini Clubman 2.0-litre Automatic. As drivers are asking for bigger and better cars
year-on-year, it’s certainly the largest model that Mini has ever produced. The Clubman is almost 4.3 metres long
(14 feet) and has a longer wheelbase than any other model in the range. This makes it much more spacious in the
rear than the previous model and with more conventional rear doors on both sides rather than the old,
rear-hinged, door on the drivers’ side this makes the car much more practical too. The rear, barn-doors open wide
to a much larger boot area and give the Mini Clubman it’s distinctive, signature look. 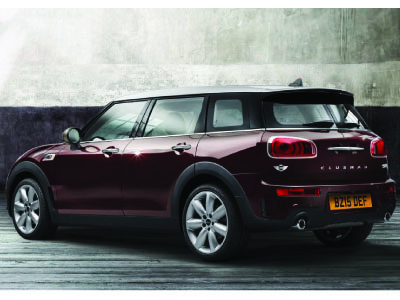 As a launch-specification car, my Clubman had all the bells and whistles. However, every Clubman has a Cooper
specification as standard so will have alloy wheels, navigation, air conditioning, Bluetooth, keyless start and an
alarm as standard. Want to add leather sports seats, head-up display, a reversing camera or sports suspension?
No problem. Mini will happily build a car for you that is as individual as you want it.

The 2.0-litre diesel in the car I’ve been driving had plenty of oomph. Need more power? Then the 2.0 ‘S’ diesel
increases the power from 150bhp to 190bhp and gives you greater performance. If you prefer a petrol version then you also have a choice of BMW’s clever and economical 3-cylinder 1.5-litre engine or the punchy 2.0-litre on the ‘S’ models. On the motorway and country lanes, the suspension was compliant and engine, wind and road-noise levels were impressively low. A softer suspension than other Minis makes the Clubman very refined yet still fun to drive and with high quality materials used in the cabin, the Clubman felt like a very comfortable place to be.

The new Mini Clubman Cooper starts at £19,965 and can be leased from around £200+VAT per
month. I’m sure that you’ll be seeing quite a few of these on the road